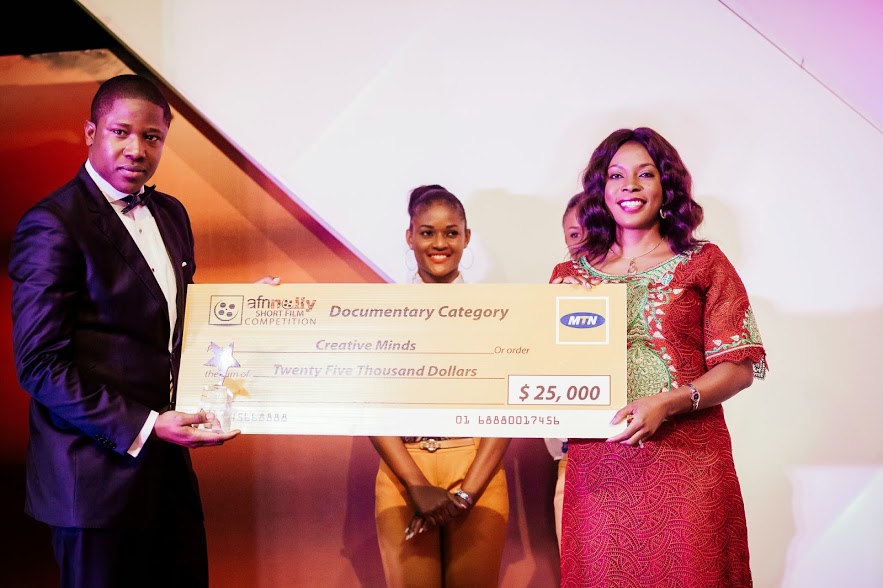 Not too long ago, I was nominated for an award by  MTN (A Telecommunication company in Nigeria) and I thought I might share the background to this, and hopefully , it helps someone find their path.

Summer 2013 was like no other. I was slowly trying to find my bearing in my craft and was looking for a way to make more progress. The earlier years, I  mainly focused on photography and haven’t really asked for anything out of life. I was and still am a dedicated christian and quiet honestly I never truly understood the concept of the principles of nature that work for us. and a particular summer conference brought all of that into visibility for me.

During the  conference which lasted for about a week, the host by the name Dr Izu, asked that we write down what we wanted out of life. He gave a 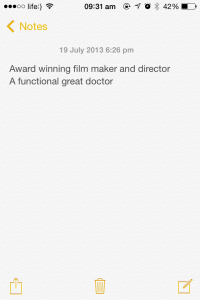 I jotted these two lines down during the conference. Check the date

brief description about how it works “That once you narrow down your focus to one particular thing, your subconscious begins to work to help you find it” he further asked a question “have you ever noticed that once you are interested in  a particular car, you start seeing it more frequently”.  He further asked us to not just have it written, we should work towards it. I proceeded to write the two things I felt I needed most, But let’s focus on the very first— An award winning film maker—Prior to that period , I found Les brown’s tape and have been an a dedicated listener, one of his quote caught my attention , it reads–

If you want a thing bad enough to go out and fight for it,to work day and night for it, to give up your time, your peace and sleep for it… if all that you dream and scheme is about it,…and life seems useless and worthless without it… if you gladly sweat for it, fret for it and plan for it and lose all your terror of the opposition for it…if you simply go after that thing that you want with all your capacity, strength and sagacity, faith hope and confidence and stern pertinacity…if neither cold, poverty, famine, nor gout, sickness nor pain, of body and brain, can keep you away from the thing that you want…if dogged and grim you beseech and beset it, with the help of God, YOU WILL GET IT! –

I literally took the quote as mine, I recited it every day and somehow it became part of me— Fast forward to the fall. I had just finished my first short film “A Man Scorned” and had a dislocation during a basketball game the same week. I was physically in pain when my friend Oluwakemi, suggested that I make a documentary for the Afrinolly short film contest.

“If you decide on a plan, The whole world conspires to make it come true”

I thought, Oh yeah, thats a good idea but then came the problem of what topic will the documentary be on, after a few days of deliberation and with 3 days to the contest deadline. I left my house with the dislocation , and without any ideas of who to meet or what to say or where to go to—But I heard that still small voice that said , just leave your apartment. In the taxi, The first person came to mind by the name Cheff Land and when I got to his apartment, and was setting up the camera, i still didn’t have questions but once he sat down and I clicked the record button , The questions came flowing, at this point, I still had no idea what  the documentary was about, neither do i have any idea what the `title will  be . I repeated the same questions for the next 3 persons I interviewed, went round the city , to capture footages.

The general work took about 4 hours, and I retired early, due to the pain but whilst on that round trip, something kept ringing in my head…“victor, If 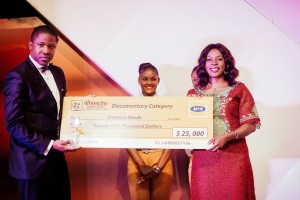 Recieving my award at the afrinolly night in Lagos Nigeria.date. february 23rd 2014

you want this bad enough to fight for it and if  neither sickness nor this dislocation can’t stop you, you will get it”. The next 10 hours saw me sitting up on my work station, editing a video that the dead line for submission was about 2 hours away. I completed my work at about 11.30 pm and The final render took another 5 hours to complete. At the end of it, The actual time for the video submission was over as it ended at 11.59 CST the previous day. I hurriedly opened the site and checked the contest page 5 hours after the closing window , and Lucky enough, it hadn’t been shut down. I quickly uploaded my video and and at 5.50 am, I was done with the upload and Once i left my work station and got back to my office, Opened the site at about 6.10 am. The site had stopped receiving submission.

The Judges selection process took a while and when the list of nominees were released , I was overjoyed. The voting process took another long haul but at the end of it all I got a mail that read that I had won the contest. Quite honestly, my documentary wasn’t the best, But somehow , Life proved to me that, If you want a thing bad enough… and as bad as you want to breathe, you are pretty sure to get it.

you’re a living inspiration ,and i get a new hope each time i read your pieces..keep living the testimonies.